One of the highlights of the Sea, Stones & Stories tour was a day in the Palestinian Territories.  For me, I had travelled extensively to the West Bank and Gaza as a correspondent in 2000, 2003-5, but so far, my tour group had only glimpsed Arab villages as the tour bus travelled from the Sea of Galilee to the Jordan Valley and through to Jerusalem on Israel’s sophisticated highway network. 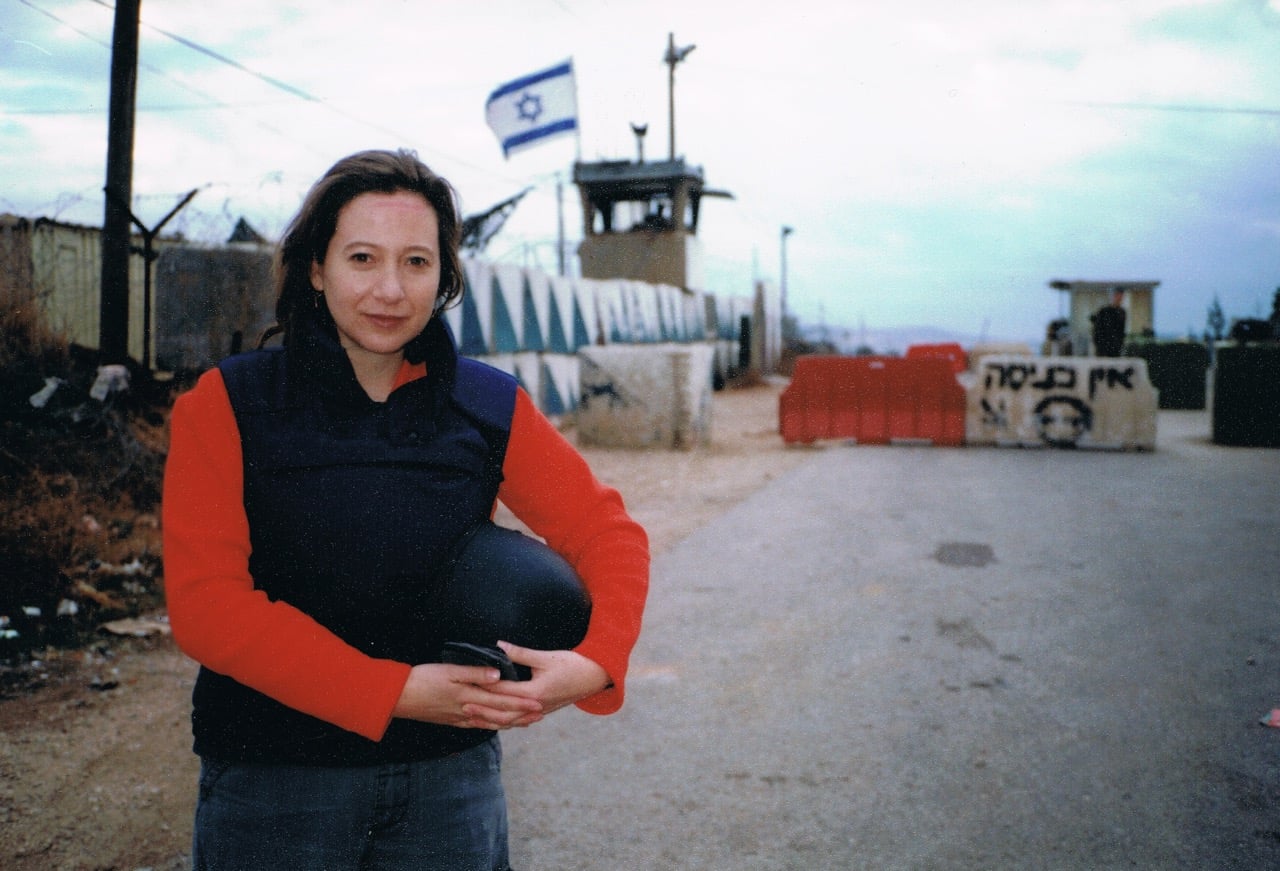 First stop was the seat of the Palestinian government, the city of Ramallah. I was last here in 2004 reporting on the return of Palestinian Leader Yasser Arafat’s body, carried in a Jordanian military helicopter following his death in Paris.

Today, at the site of Arafat’s former compound, you can visit his tomb. There’s also a museum with an evocative exhibition focusing on the story of how Palestinians ended up with the patchwork of territory they have today.

Until our visit, I don’t think the group fully grasped the complexities of ‘the situation’ today and I was keen for them to experience this.  To get to Ramallah (approximately 10 kms from Jerusalem) we had to switch tour buses and drivers. Our regular Israeli tour guide wasn’t allowed to travel with us.

This daunting red sign is placed at the entry to Palestinian cities.  The ‘Area A’ is a reference to territory under the administration of the Palestinian Authority in accordance with the Oslo peace accords. 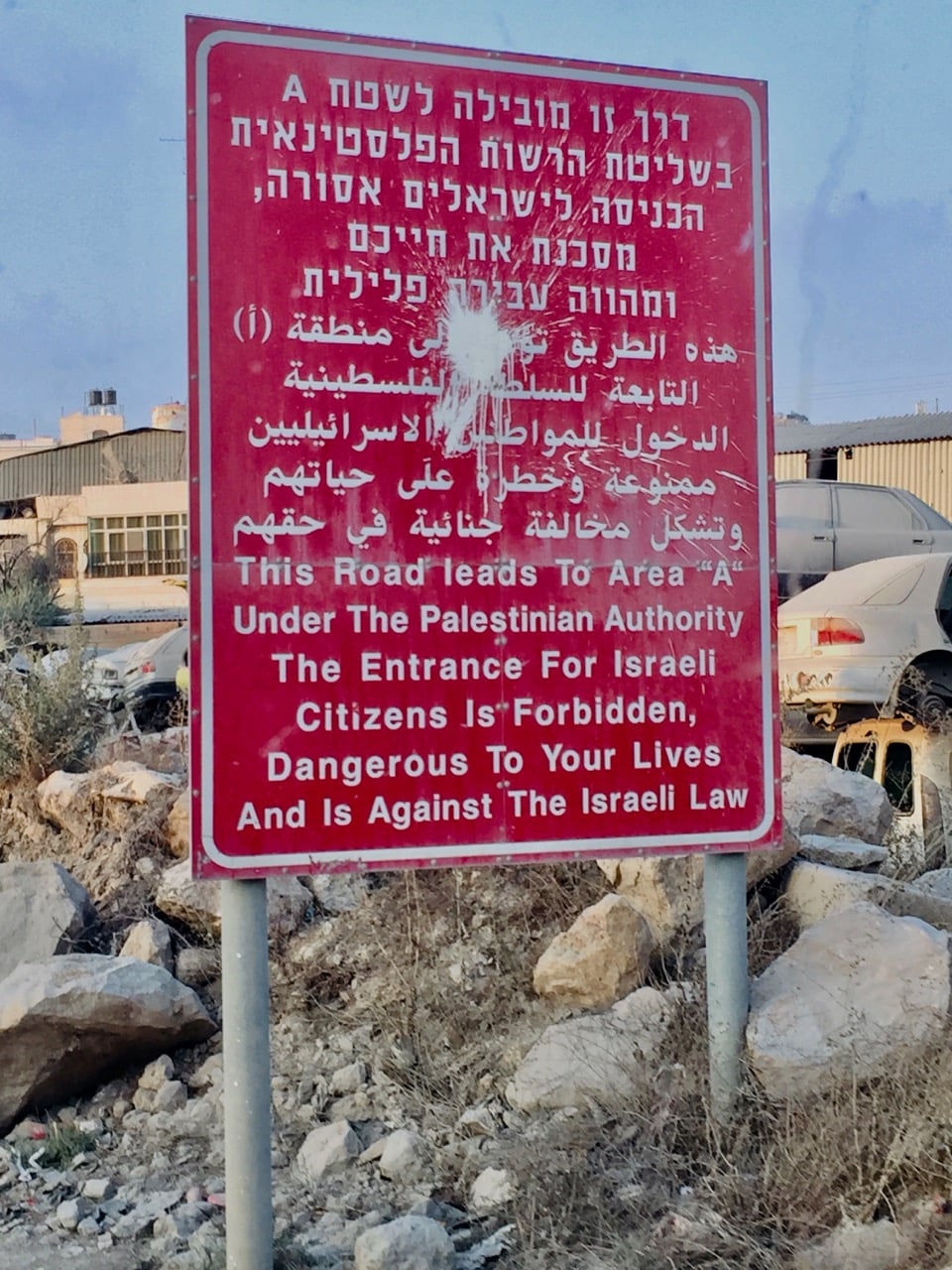 The bus climbed the hill out of Jerusalem and eventually we reached Qalandia checkpoint, Israel’s fortified entry/exit point with the Palestinian Territories.  Palestinians were passing through the checkpoint on foot, in cars and mini-buses to go to jobs, schools and universities either in Jerusalem or other West Bank cities like Bethlehem or Hebron. 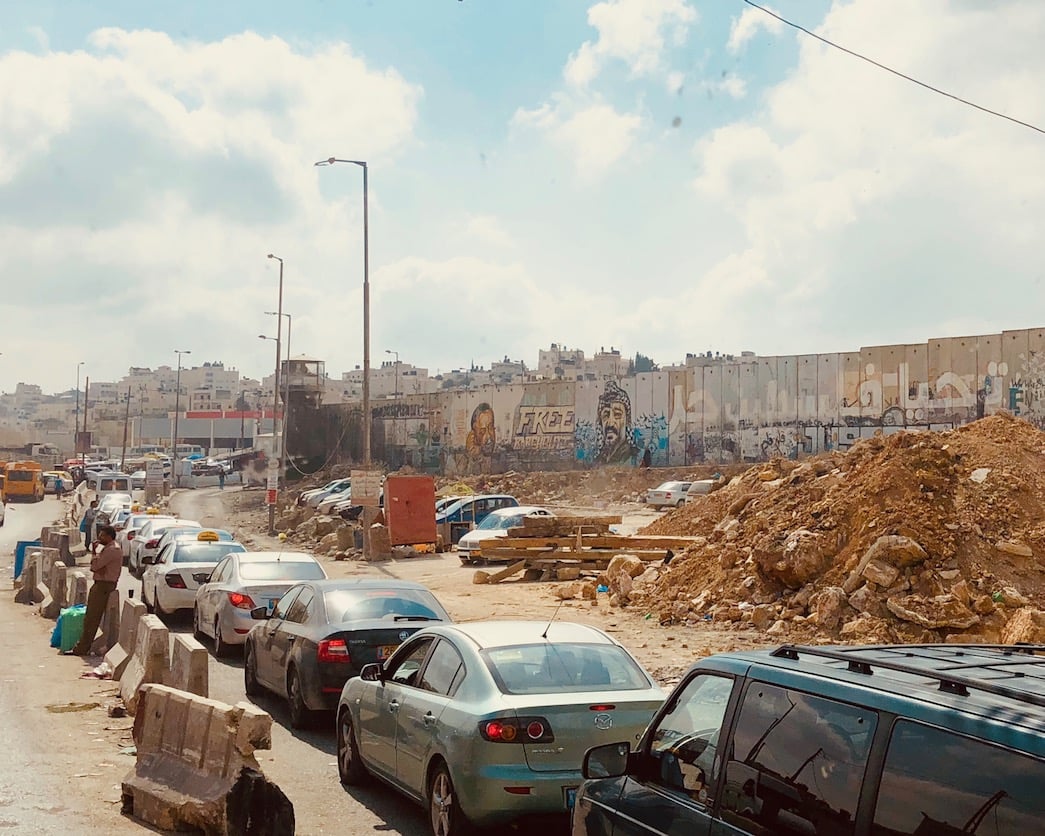 In Israel, the government takes care of the roads. They are often lined with purple and pink bougainvillea.  Palestinian roads are littered with plastic bags and bottles.  The checkpoint and the West Bank security fence, as Israel calls it, presents an image of control, of occupation.

The bus pulled over and we waited for our Palestinian guide who had phoned to say he was running late.  He’d tried to get a permit from the Israeli military enabling him to pass through Jerusalem in order to meet us, but the permit didn’t come through so he had travelled from Bethlehem (on the other side of Jerusalem) via Palestinian roads.  He’d left his home at 6.30 am and it was nearly 8.50 am.

“I’ll be there in around ten minutes,” he promised.

True to his word, the Palestinian guide, Motasem Amro, a cheerful young Palestinian in his late twenties, hopped aboard our bus ten minutes later.

The first thing he did was to show me a photo on his phone.

“Know this guy?”he asked with a twinkle.

The photo showed him standing with former Australian PM Tony Abbott who visited the Middle-East in late 2016.

“I was told to give him a purely religious tour.  I was not to talk to him about politics,” he said, laughing.

“But personally, I like to talk about the political situation,” he continued.  “In fact, I believe it’s my mission.”

Our Australian group were already hooked, keen to see for themselves what life was like on the other side of the fence. 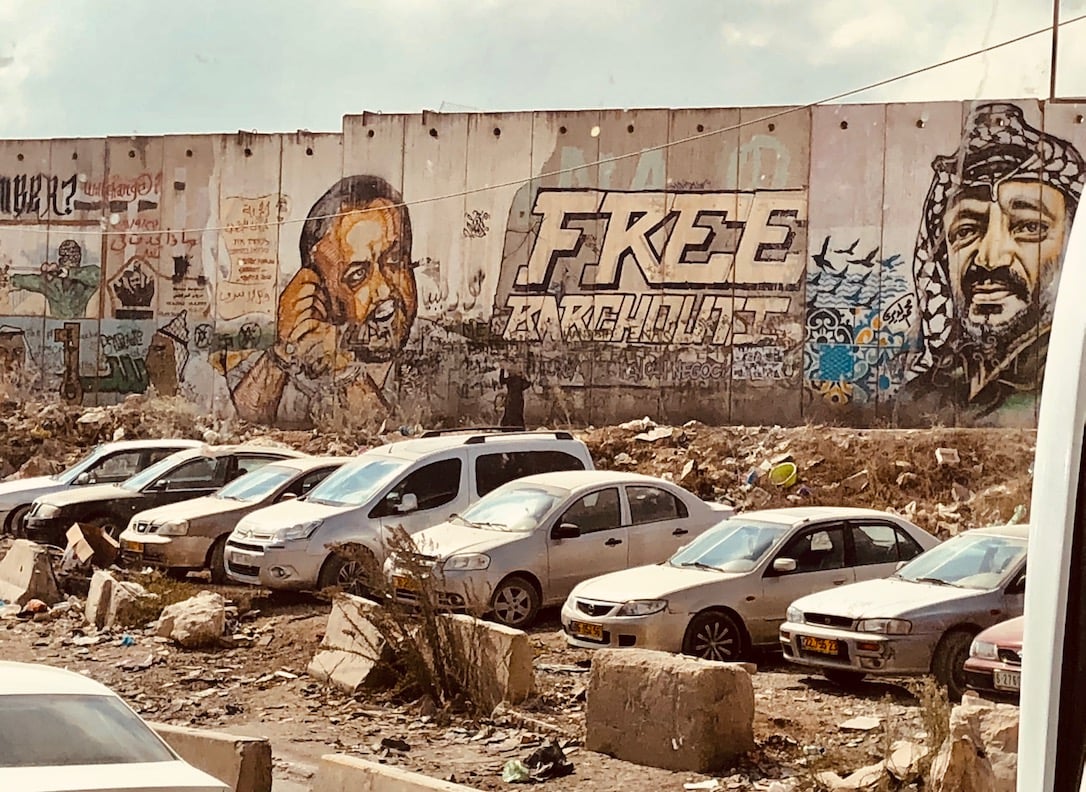