My Ocean Challenge 3: Asking For Help

Do you know people who need help yet are afraid of asking?

I was part way through my fourth ocean swimming session since beginning a personal challenge this year; to question my fear of the ocean and have the courage to swim in the surf.

The previous session was so good. Bondi Beach had been ‘like a bath’ as one of the other participants put it, barely any surf, just the way I like it, and an excellent confidence booster.

Then Saturday arrived and with it a whole new set of conditions. Rolling clouds gathering since morning yawned out their contents and by the time the session began at 11.30 am there was steady rain, squally winds and a churning sea.  Huge sets of swells and white-topped waves broke onto the shore. I counted only five surfers in the water. On the beach, lifeguards outnumbered beach-goers. I would never have chosen to swim in such conditions. But the instructor waved me over.  The swim was going ahead. 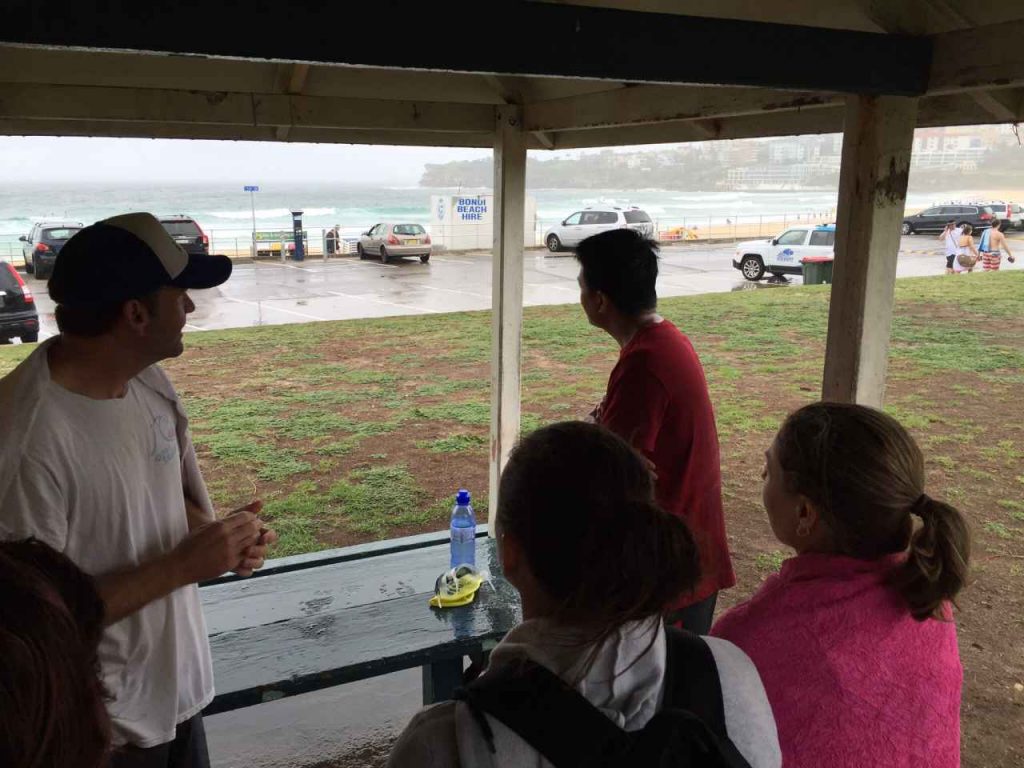 As we were huddling, dripping in a cabana, the instructor talked about the types of waves we might encounter. I tried to think of how I would approach getting through the surf to the calmer water behind the breaking waves. I tried to focus on the exhilaration I’d felt after the session because I would have broken through a new barrier.

When it was time to leave the shelter and jog onto the beach (still raining) the scene was even more fearsome. I kept my goggled eyes trained directly in front of me, but not too far into the distance.  Before I knew it, we were into the waves.

Andre was the lead instructor. There were two other instructors accompanying us. All of them held rescue tubes, a kind of flotation device.  Andre directed us to swim further out, warning us to keep left because of a strong current. It was really tough.  So much was energy expended on trying to swim in a straight line.  I kept looking out for flatter water ahead, but there wasn’t any. Instead, I was diving deep under wave followed by another wave. It was the only way not to get submerged and you couldn’t simply float or tread water or you would end up on the rocks.  It was just exhausting. 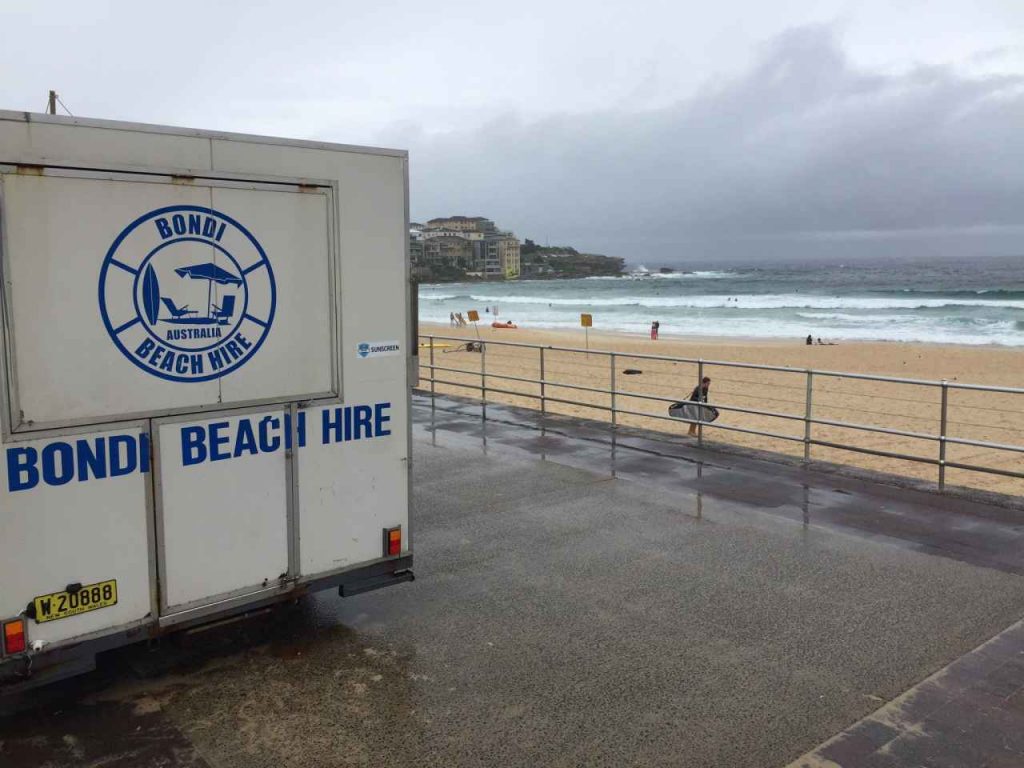 After maybe 10 minutes of this – it wasn’t a long time but I was well and truly out of breath – I realised that the oncoming waves weren’t going to stop or flatten or give me a break in any way.  And I had no more energy to dive.  If another wave was to submerge me, I wouldn’t have enough breath left to hold.

Suddenly I felt the panic rise. It was about having absolutely no control. I calmly thought, I am going to die out here in the waves of North Bondi.  No-one will even know.  I am going to run out of breath and at that pointa double wave is going to wash over me. I didn’t have the stamina to get back to shore and reaching to the rocks was out of the question.  I would be smashed to pieces.

At that moment I had two choices: to be brave (which is what the personal challenge was all about) or to ask for help.  I chose life.

I said it quietly the first time.  Help.  Nobody heard.

So I yelled.  I …NEED… HELP!
Two women from the group appeared next to me and asked me what I needed.  I was exhausted, I told them. No more energy.  I needed the instructor or the rescue tube.  And moments later, J one of the instructors, swam over with the missile-shaped tube which was attached by a cord to her ankle.  Now I knew I would just pop up over the waves instead of being dragged under.

Back on the beach, everyone who had heard me yell was very sympathetic. I discovered that many of the swimmers had felt out of their depth and it wasn’t just me.

Not long ago during a conversation with author (and 2015 Senior Australian of the Year) Jackie French, she told me how she had only recently learned to ask for help.

“It was actually a big thing,” she said.

It was an enormous turning point.  Whether it’s asking for help about big things or whether it’s time when someone in the family is ill and suddenly you are realising, ‘I don’t want to face this alone’, I will actually ring a friend and say, ‘Please, I don’t want to be alone.  Please come and sit with me.”

And what got her to that point?

“Old-age and wisdom,” she laughed.  “I think human beings are essentially co-operative beings and it is better to do it together.”

I read a book over summer on the drive between Sydney and the Gold Coast.  It was called The Art of Asking by Amanda Palmer.  It’s a memoir where she spelled out the stages of a hard-won performing careerthat began as a street statue and culminated in a supremely successful Kickstarter campaign.  She crowdfunded over a million US dollars to fund her music productions.

Although extremely illuminating, not all of Amanda’s story is relevant here.  However my two big takeaways were that asking is not only a solution, it’s a win-win because the giver gets something in too; they feel good. The other takeaway was that we often focus on outcomes, rather than the process.  The end goal rather than the joy of how it’s achieved. That’s probably why I went on to book more sessions of ocean swimming after the first one; because it wasn’t enough to say ‘I’ve done the course.’

Half-way through Tumultuous Saturday, the rain finally halted and the beach began to fill with sun-seekers, swimmers and surfers.  The image I had in my head of being stuck in the grey swell dissolved.  In shallow water, we practised reading the waves, learning when to dive under to grab-the-sand (which I spoke about in the last blog post) and when to catch a wave and body surf back to the beach.

The ocean is still a mystery to me.  There will be many days when I am not tempted to go into the water.  But now I think about the ocean pretty much all the time. The sea is now an even greater source of comfort, beauty and curiosity.

As I finally managed to body surf in to the beach without the feeling that I was about to die, it felt good to be just a little scared after years, no decades of avoidance.  It was even more liberating to finally call for help. 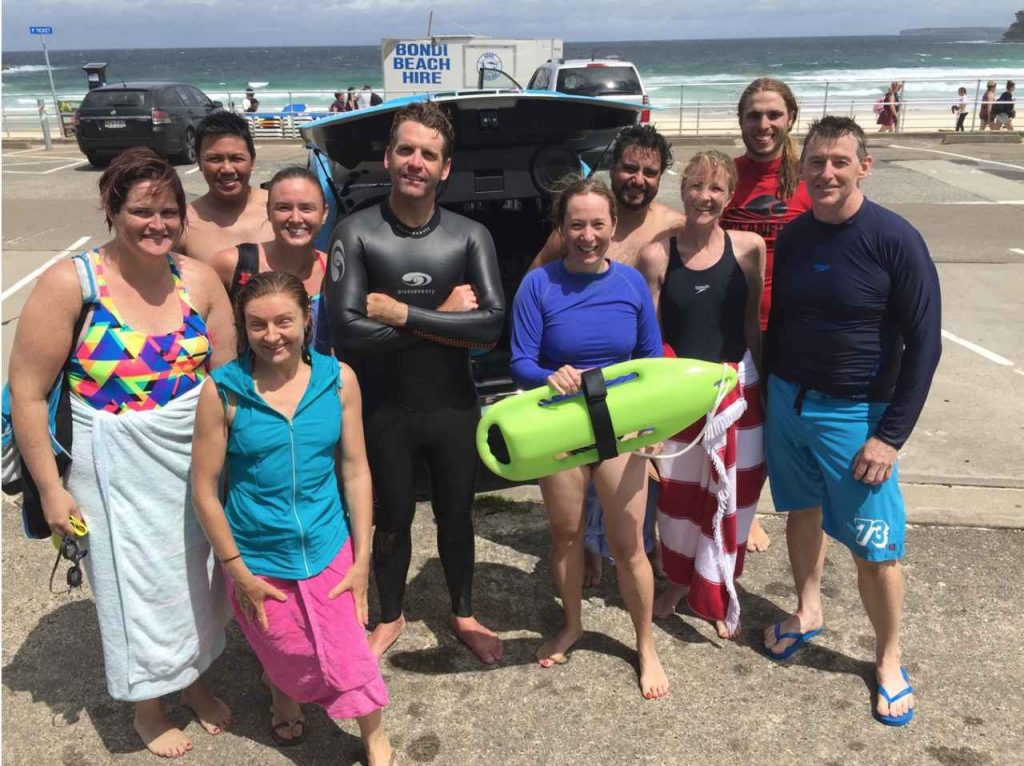 Thank-you to the swimmers who helped me and to Andre and the team at OceanFit for keeping us safe. You can see the response to this post on FB here