I saw this tweet from my colleague Kumi and like many of you, I connected with the sentiment she expressed. 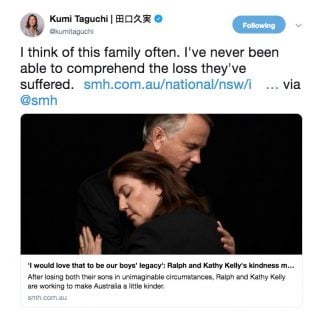 A few years I was doing a Q&A with Rosie Batty at a conference.  One of the things that stuck with me was something along the lines of how she had always feared losing her only son, Luke.  And then the unimaginable happened; Luke was killed by his father.

The Kelly family, like Rosie has been through the unimaginable.

Hearing about the attack on Thomas Kelly in July 2012 felt sickening.

That his younger brother Stuart would take his own life in 2016 was another incredibly cruel low for the Kelly family.  How could such loss strike twice?

At the time I hadn’t followed the events between Thomas’ death and Stuart’s suicide too closely, but I know about these events intimately now, having read Too Late Too Soon, Kathy and Ralph Kelly’s blistering, heart-breaking book which has just been launched.

Two weeks ago I interviewed Kathy for One Plus One which airs this Friday on ABCTV. 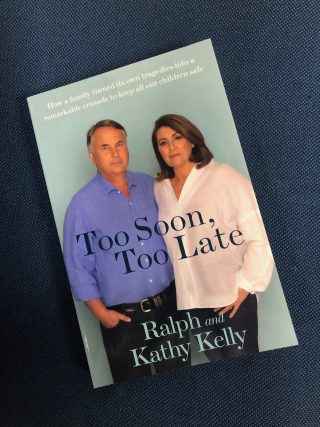 When I heard my show had been offered the interview with Kathy, a part of me froze.

How was I supposed to face a woman who had been through the unimaginable. Twice.

First I had to deal with my own dread.  What if something like that happened to my family?  How would we survive? What would it be like immersing myself into Kathy’s world?  How does anyone move on?

I read the book from cover to cover. The first chapter ends with Thomas’ death.  It had a pace that puts you right in the scene.  And it was utterly harrowing.  I put the manuscript down and cried.

But as I progressed through the story, scribbling my thoughts down in the margins, the sense of dread receded. I searched for anchors.  There are many experiences in the nearly 500 interviews I’ve done and the places I’ve travelled to.  I’ve had friends and family who have stories of great suffering and great restoration.  As I crafted my questions, I read poetry (mainly Mary Oliver) about loss and meaning.  I read up on resilience, and noted how Kathy said she and her husband Ralph dealt with grief in different ways.

I now had a pathway. I tidied the questions into a neatish road with a beginning, middle and end.

I’ll never be ready, I thought.  But then I never think I am.

I’m usually thinking up questions to the last possible moment.

Before I knew it, interview day had arrived and Kathy appeared in the studio.  We chatted briefly.  She was cheerful and seemed to be in a good place. I liked her instantly.

Did I hit the mark with the interview?

I’m never the best judge.  But now when I think of Kathy I don’t think of her as a sad person with incomprehensible loss weighing her down. She is someone with multiple dimensions.  I think of her walking the dogs in the park.  I think of a partnership she’s held together, of nurturing her daughter Madeleine. I imagine her having dark moments as well as times of clarity and lightness and joy.

For me that feels better than the cocoon of sympathy we sometimes wrap people in. 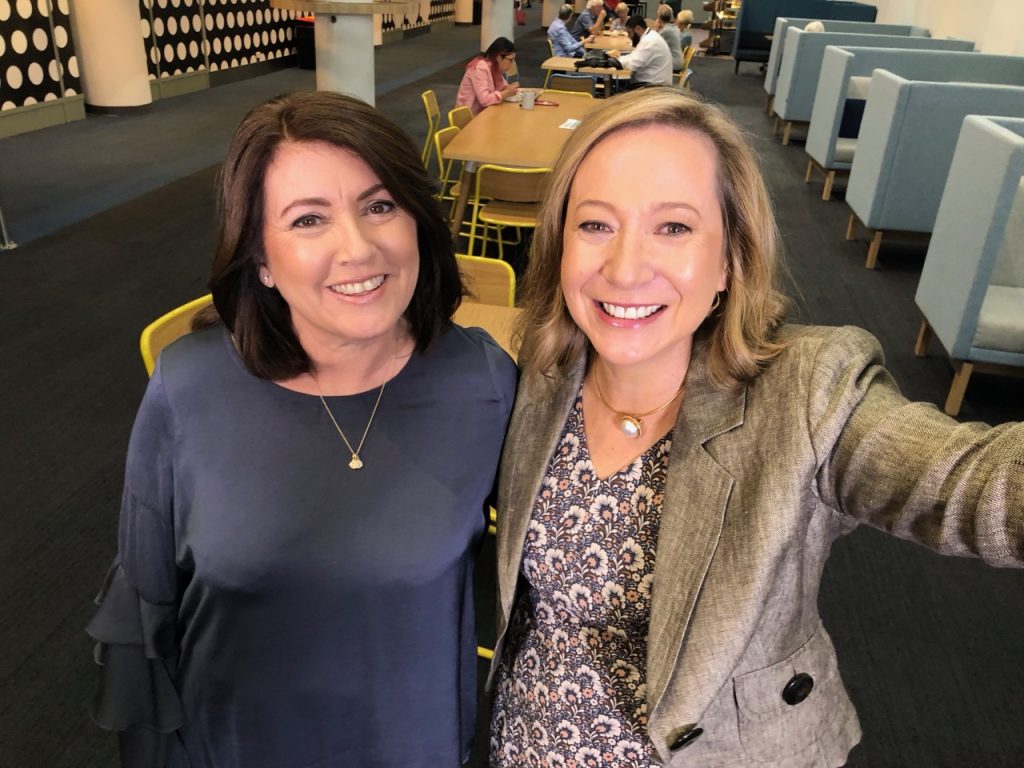