As ordinary citizens, what should we do when there’s a terror alert?

Some years ago when I was preparing to move to the Middle East, the ABC sent cameraman Ron Ekkel and me on a hostile environment training course in Jerusalem. 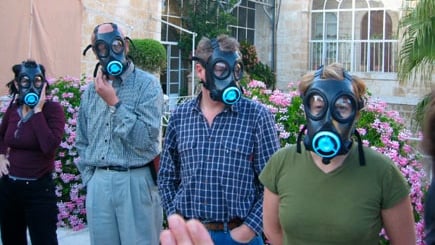 In case you don’t recognise me in the photo, I’m on the far right in a khaki T shirt, with Ron standing next to me.

Thankfully, we didn’t ever use the gas masks.

But for some years, even after I moved to U.K. (a few months before the 2005 London Bombings), I practised personal vigilance.

In the training course, we were taught, basically, to smell a rat.  At all times.

So, if someone asks for your help and tries to lure you away from your path (often by saying they need help, or someone has been injured) don’t go if it involves leaving you in any way vulnerable.

Don’t to sit in the middle section of trains or buses.

Try to avoid large crowds, or if that’s unrealistic, identify your exits.

For many years, I practised vigilance as a habit.

You might say this is sad. Or perhaps you think this is wrong and we shouldn’t live like this.

But many cities all over the world, including New York, encourage their citizens to be vigilant. Subway commuters in NYC are reminded every few minutes that if they see an unattended package or bag, to notify the driver or manager at the next station.

Bags are searched in some venues.  My family and I had our bags searched going to see The Lion King on Broadway.

And police in NYC are plentiful and very visible.

Frankly, I think this is a good thing.

As Australians, we can be complacent. This is not going to go away.  It’s worthwhile practising vigilance, so that we can be relaxed and easy-going. I think it’s a small price to pay.