One day when I was a child of about ten visiting London with my family, my Mum’s cousin (we called her Aunt Gracie), introduced us to a strange woman who had come for tea.  She had long, sandy-coloured hair and a manic laugh.  Her name was Margaret.  She laughed and screamed like a naughty child and after drinking some tea that was too hot, she laughed and screamed at the same time.

Margaret was Aunt Gracie’s daughter-in-law.  My Mum told us later that she lived in a home, like a hospital, where people took care of her day and night.

“Where is her husband?” I wanted to know.

And Mum told me and my brothers that Margaret’s husband, Billy; Aunt Gracie’s son, had died in an accident.

Margaret and Billy hadn’t been married long when Billy was sent by his company to Sydney in the late 1960’s. The young couple were filled with excitement at this adventure. They had been in Sydney for no more than a few days when they did what many tourists do.  They went for a refreshing dip at Maroubra Beach.

While they were in the surf, they got caught in a rip.

Life-savers reached Margaret.  She had been under water for some time and as a result, her brain had been irreparably damaged.  In the space of a few short minutes she had gone from being a wife to a child again, never to return to her old self.

On Saturday, I thought about Margaret and Billy for the first time in years.

Inspired after speaking with marine ecologist Professor Emma Johnston about the wonders of Sydney’s coast, I booked an ocean swimming workshop at Bondi Beach.

And after I booked it, I got really nervous.

The sea has always been part of me.  I was born and grew up on an island in the South China Sea where many summers were spent on boats or in the ocean.   My ancestors travelled all the way from the Outer Hebrides in Scotland to China by ship.  These days I live five minutes walk from a beach.  And I love being in the water, as long as it’s a pool or something resembling a lagoon.

In recent years, the ocean for me became something to fear.  Somehow, hesitation became reticence and reticence became avoidance.

I thought it was about sharks.
After a family holiday to the Great Barrier Reef when I was a child, I saw for the first time just how much was going on underneath the swimmers. That’s okay.  It is their domain.

But in Saturday’s ocean swim class, as we were instructed to observe the surf, the instructor began to talk about knowing your terrain, the swell and sandbars and depth …and rips.  The body of flat water running in the opposite direction to the incoming waves, I finally understood to be a rip.  And out there somewhere, floundering in the surf of my imagination, were Margaret and Billy.

Tentatively, I approached the water’s edge along with the others and tried to block out Margaret and Billy.

The water was surprisedly brisk and I dived under to immerse myself.  I felt like my body had slipped into a giant aquarium, gliding over rocks and seaweed.  Delightfully there were fish, maybe 20 or 30 centimetres long.

We remained in the water fifty metres out from the shore for around forty minutes.  I got a cramp in my foot and wanted to borrow the instructor’s board, but I managed to stretch out the cramp and stay afloat.  After learning how to spot waves and landmarks and practise diving under the water, it was time to return to the beach.

We were told to swim back in between the surfers bobbing on their boards as they waited for a wave.  Suddenly, a big wave crested over the top of me. I felt powerless.  Water went up my nose but still I swam haltingly towards the shore. Gradually I became aware of different sounds. I could hear kids’ laughter at the water’s edge.  My legs were shaking.  My feet finally touched the sand.

I didn’t drown in the ocean.  In fact I felt foolishly euphoric. It was liberating and intensely joyful; I keep getting flashbacks of the calmness of being in an acquarium…

And when I got home, I booked in for Level 2, to see if I can stare down my fear one more time. 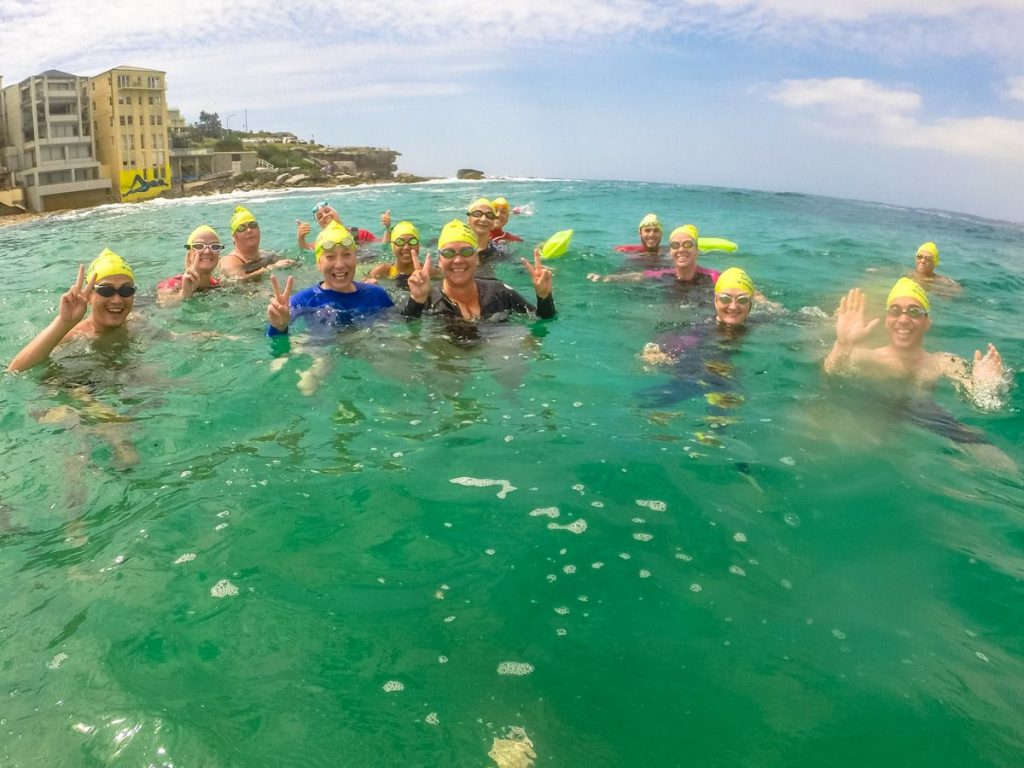