Have You Experienced Sexism?

This was quite a long question, but it’s worth seeing it in full…

So my question is about your professional experience as a woman: do you find that it has been different for you as a woman than if you were a man? Have you found that you’ve had to work harder to “prove” yourself, or faced more obstacles? Have you experienced sexism, and if so, how did you manage to overcome it? 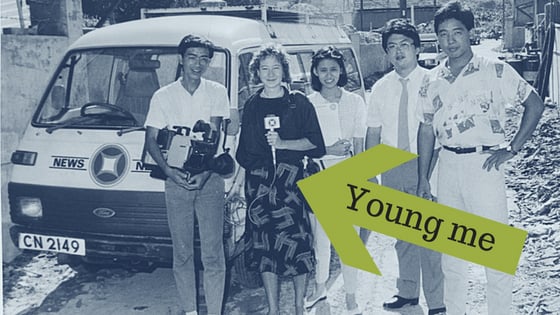 I’ve been fortunate that when my career started in the 1980’s, there were no barriers to a woman being a general reporter, a business journalist, a TV newsreader.  I remember my first TV newsreading job in Hong Kong, the male presenter had been an English teacher at my high school and there was a 40 year age difference between us!

The first time we worked together, I walked onto the news set and said, “Hi Mr Clark!” He replied, “call me Leslie now, Jane.”

In one job interview, I was made to sit on a (high) barstool while the news director sat in a regular chair (so he was looking up at me).  He apologised and explained that there was nowhere else to sit, and there certainly wasn’t in that room, so I took the bar stool as he suggested.

I got the job, but then the director insisted we go out for dinner so we could talk more about the role.  This was annoying as I was visiting family at the time and wanted to spend time with them, but it gave me an excuse to leave the job-explaining dinner early.  Nothing happened, but really, did I have to go through that? I badly wanted that job so I didn’t dare say no.

Fast forward to 2018 and there is always a bit of casual sexism around, but my workplace is probably less sexist than society.  To the question, have I had to work harder to prove myself or have I faced more obstacles in my career because I’m a woman, the answer would be, not that I’m aware of.

Here’s what I know now…

I’ve always been poor at asking for pay increases.  I’ve also realised, probably too late, that I should have been much more forward about asking for jobs/projects that I wanted.  In my early days at the ABC one of the senior managers told that I was an investment. I really clung to that lovely thought.  I just expected (naively) that if I was the right person for the job, I would get it.

I now realise that I should have been much more proactive.

Be as proactive as possible.

If you don’t enjoy your work, move on.

If you want a role or project, speak up.  Continue to speak up for the job you want.

If you don’t have the skills, get them. Don’t be limited by barriers you imagine are there.

Ask for feedback. Act on it, don’t take it personally.

Find mentors, at every stage of your career.

Take as many professional development courses as you can.

Is he chatting to the boss again?  Don’t underestimate what your male colleague asks for.

Don’t let you fear of sexism hold you back. There are better boundaries and processes to guard against

this now than there ever have been. There is help out there.