Are Guests Always Honest With Their Answers?

Great question!  As in news, we aim for fairness, balance and accuracy in producing an interview show.

We are quite organic: we record each interview for approximately 30 minutes and edit it to fit a 28 minute program slot, which is usually 26 minutes of interview.  We may shorten answers because of time constraints or where the answer slows down the flow of the interview.

If we detect something that’s potentially defamatory we consult the legal team. Hopefully, if there’s an issue that isn’t factual, I question that during the recording. But, whether someone is honest is a tricky one because our interviews rely on the memory, recollection and also the point of view of a guest.

Sometimes I may not agree with a guest’s opinion, but it doesn’t mean the opinion shouldn’t be heard.

In a recent interview, author Blanche D’Alpuget discussed her essay On Lust where she described being molested at age twelve, by a judge (now deceased) who was in his fifties.  She refused to see this as sexual abuse or  to see herself as a victim.

This is from the program transcript: 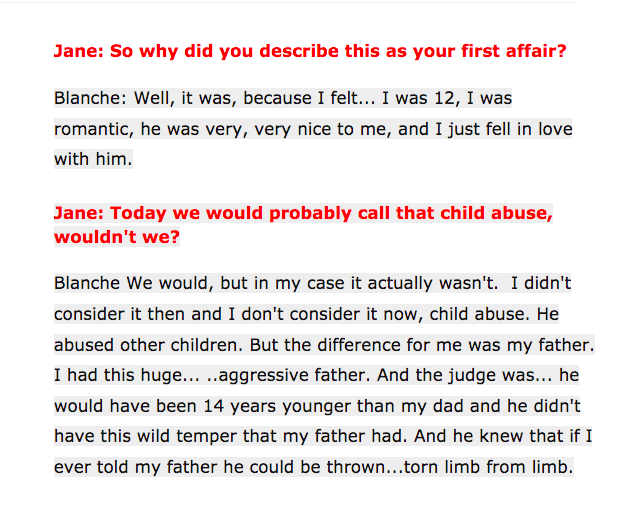 Some viewers didn’t like that.  They felt I should have challenged Blanche further (the exchange continued but I didn’t hammer into her point about whether the relationship was sexual abuse or not).

I found what she said confronting, but I also accepted the point of view that she didn’t regard herself as a victim. I don’t think you can change someone’s mind by bagdering them.  In fact, I wanted to understand the fear of her powerful and terrifying father.

I hope this answers your question.  There will be FAQ’s relating to this one coming up.