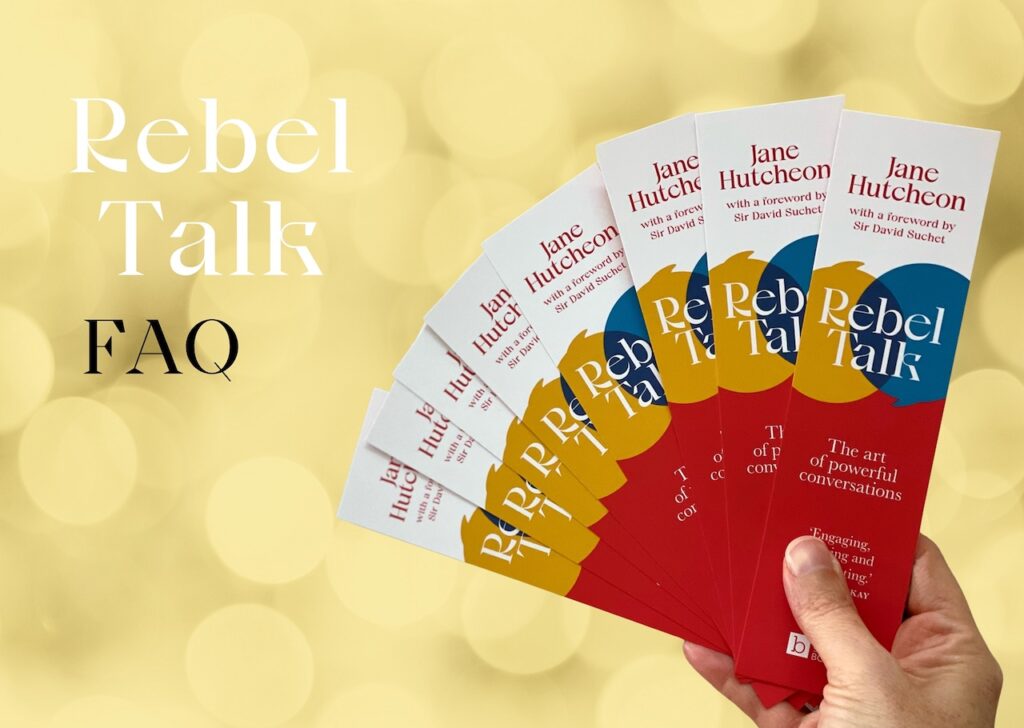 How long did it take you to write Rebel Talk?

It took me about four months to write it. It’s not a very long book and it’s designed to be re-read. I’m proud of this publication and grateful to publisher Jon MacDonald at Brio Books. I like how it looks and that’s important to me, too. It’s the first in a series, so stay tuned!

What did your career in journalism as well as being the creator of ABC’s One Plus One teach you about the art of conversation?

I learned that when I’m put in front of someone for a professional conversation (or interview), I can take it anywhere. I have permission to ask anything, even if it’s something embarrassing or intimate. That’s my job.

But in my personal life, I was brought up to be a polite girl and then a polite woman. I was brought up to hold my own thoughts back, to be reticent, which I felt was something that held me back. I couldn’t articulate what I wanted to say to some people. I’m talking about conversations with my bosses, my friends, my loved ones.

Writing Rebel Talk was about examining my reticence. It was a journey of discovery for me. What was it that held me back? Why was I so…‘stuffed down’? I realised that if I had this problem, other people might have it too.

Has our conversation muscle weakened during COVID?

Yes, but I think this happens when we engage online too much. When we speak with someone face-to-face, when we have eye-contact, when we can see another person’s responses, their reactions, whether they are looking sad, anxious or agitated, this helps us pick up on how we affect people. We don’t get many of these non-verbal messages when we have conversations online or on social media.

We’ve lost conversations skills during COVID, but fortunately, we can pick them up again.

I love a good reset. I see Rebel Talk as being a conversation reset. In the words of tennis player Alizé Cornet who made it to her first quarter final in a grand slam after sixty-three attempts, “It’s never too late to try again.”

Why did you call the book Rebel Talk?

Rebel is an acronym. I’ll talk about what the acronym stands for in a moment. I’m asking people to consider harnessing their inner rebel. Say you’ve had a bad interaction with your boss. You want to say something back, not in a nasty way, but you want to explain yourself better. You don’t have a good relationship with her. You wonder, should I contradict her, tell her she’s wrong or do I hold-back out of respect? Harnessing your inner rebel is about being deliberate in your conversations. Don’t be the silent one, be the person who can speak your mind. It comes with practice.

I really wanted this to be a call to action. If you dig deep and think through the conversation. Ask yourself, what can I do to change the conversation? How might I approach this?

Can we talk about the Rebel acronym? The first letter is ‘R’ which stands for Readiness. How do we prepare for a conversation?

In the book, I talk about a TV budget show I once hosted many years ago. It was live television. I thought I had all the information I was supposed to deliver in front of me. I had it written down in my notebook. Only problem was, I couldn’t read my own notes.

Then, another there was another fly-in-the-ointment as there often is in live TV. The other broadcaster who was in another city, wasn’t ready. The director wanted me to continue presenting only I didn’t have any more words to read out. I was opening and closing my mouth like a baby bird. I tried to read from my notes, which were horrendous messy. And, you know, maybe it was youth. Maybe it was over-confidence. But it was such an embarrassing moment for me and it happened because I wasn’t prepared.

These days, even if I go to the doctor, I will make a list to remind myself of everything I need to discuss. If you’ve ever told your kids to pack their schoolbags the night before to avoid a last minute panic (and itemise what they need to pack) that is the art of preparation. It’s the same in a conversation.

I think for readiness, there’s another acronym you use, which is easy to remember.

Yes, it’s RIO: resources, intention and outcome. Resources: what information do you need in order to be ready? Intention: know what your aim is. For example, ‘I know today I’m going to talk to you about my book, which is to encourage people not to be silent, not to hold back, but to speak their minds with kindness and clarity’. That, simply put, is the intention. And thirdly, Outcome: how do you see the outcome of this conversation? When you answer those questions you already have a measure of preparedness.

The next letter in the Rebel acronym is ‘E’ which is for Empathy. That’s a buzzword in leadership circles at the moment. How is empathy a conversation tool?

I learnt this after interviewing five hundred people over nine years during my time at One Plus One. I learned that if you want to connect with people, even people you don’t agree with, you have to find the door marked ‘empathy’.

Actor Hugo Weaving once told me about how in the Bodyline miniseries, he played the role of English cricket captain, Douglas Jardine. Weaving said that Jardine was not instantly likable in many ways. But then he discovered the Englishman enjoyed fishing and was also very close to his family. Knowing these aspects of his personality helped Weaving connect with Jardine’s character using empathy.

You talk about the importance of eye-contact. Why?

When you lock eyes, it’s like your soul connects with another (to borrow a phrase). Eye-contact can be very important, particularly when you are listening. But eye-contact isn’t always useful. In some cultures, it’s not done to lock eyes with someone. This is also true in disability culture. Someone living with a disability like low-vision, has to use other senses to maintain the focus on who they are speaking with.

Tell me about the third element: Be Curious.

I love the maxim, ‘Be curious, not judgemental.’ We are all guilty of asking superficial or vague questions from time-to-time. For example, the question ‘How are you?’ Is that designed to elicit an answer or is it about filling-in time? If you really do want to know how someone is going, try being more specific. Remember your last conversation with them and follow-through. Recall what’s happened in their lives. Ask simple questions to raise them up, not to wear them down.

If you come up with a good question, write it down. Be a question collector. I note down questions and recycle them because when they’re good, they resonate and it’s fun when you see someone light up because a question has hit the right spot.

A good question is one that’s memorable because it stops you in your tracks.

The fourth letter in the acronym is E: Engage Attention.

This is about listening. I use the term humble listening. When you start to take listening seriously, you can think of throwing a cocoon around you and your conversation partner.

You don’t interrupt. You lock eyes and then you ask questions afterwards, short questions to make sure that you have understood what they are telling you. By asking questions, the other person knows you are serious about listening.

Finally, the L in Rebel is for Lead The Way…

Once you have the tools to improve your conversations, you can choose the path you want to take. It’s about taking control. It feels powerful!

Recently, I had a conversation with a friend about getting a pet. She wanted to get a dog for her child but she didn’t know if it was a good idea or not. Her husband didn’t want a pet in the house. But their child is often anxious and a pet could be a calming influence. My friend and her husband discussed the issue frequently and it usually ended in an argument about who was going to be the chief dog-walker and cleaner. I asked my friend whether her husband had ever considered the positive aspects of pet ownership, for example, how it might comfort or calm their child. Or had he only looked at the downside?

My friend’s face lit up. She had another conversation with her husband and the following day later he admitted he hadn’t thought about the upside of pet ownership. Then he changed his mind and began to support the idea.

Disagreement doesn’t have to produce an argument which many of us shy away from. It’s actually fine to argue. But if we thought less about being right and more about how we might flip the script, our disagreements could become more productive.

Is there a last piece of advice you could give us?

Don’t offer advice unless you are asked for it. Don’t fear silence in a conversation. Don’t try to ‘top’ someone else’s great story. And finally, when you are faced with a difficult conversation, remember that timing is essential; if you catch people at the wrong moment, you risk losing even before you started. Work out what is a good time to talk, what the message is that you want to deliver and how the other person might be hearing you instead of how you might want to be heard.

And my final word, if you are speaking with someone who is going through difficult times, they normally want to know that you’ve listened and that you care. Don’t tell them how it was for you when you went through that tough experience two years ago.

Wishing you many powerful conversations!