I asked the question ‘What does Grief feel like?’ because I used to avoid talking to people about bereavement and death. When I started the interview show One Plus One nearly ten years ago, I began to notice that, in the little safe space of a studio, people wanted to answer life’s big questions. And so I got braver and asked increasingly intimate questions about life, death and beyond. 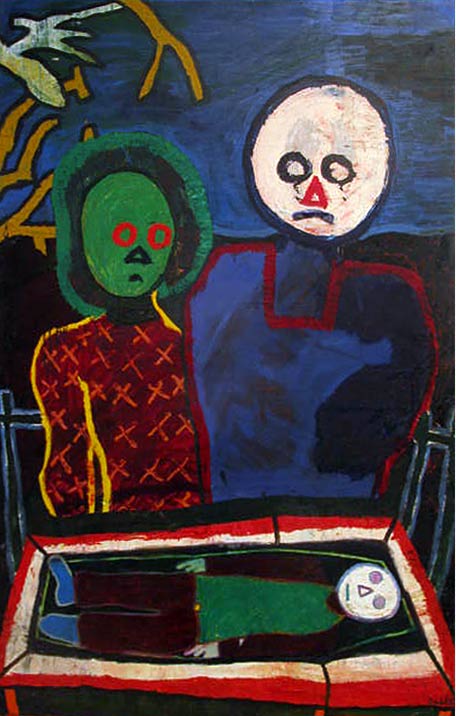 ‘Grieving’ by Bernard Ollis 1973.  By kind permission of the artist.

Helen, after asking the question I’ve learned that most of us have had their lives interrupted and sometimes deluged by grief. Several people referred to the emotion as a Tsunami.  It seems right to talk about it and thank-you for writing about the grief you’ve lived with  through the life and death of your daughter Jacquie.

Personally speaking, I have encountered much grief although I would say my experience is still fairly limited.  My Dad (who is 90) says the worst feeling associated with grief is going through a person’s belongings, deciding what to let go. Belongings create memories and it feels like a betrayal to discard or pass these on.  Even the act of downsizing a home – without the presence of death – can induce grief.

Helen, humans experience grief in many ways: losing an unborn child, losing a parent, a parent losing a child. There are parents who witness their child being killed and are unable to prevent it. There are parents who never learn the truth of why their child went missing. There is grief at an imagined life lost and grief at the loss of body functions, brainpower, memory or a permanent change in circumstances.  There is living grief when a parent loses custody of a child, a parent knowing a child has been hurt and they were not able to stop it.  The list goes on.

I often recall visiting a group of Shia women in Najaf in Iraq in 2003 after the discovery of a mass grave.  Imagine the grief of these women arriving at the grave site to spy a shred of clothing or part of a shoe sticking out from the dirt that snagged recognition after more than twenty years.

I think our ‘western’ style of bereavement is inadequate.  After a certain time, we are expected to put on a mask to indicate we are fine when inside we are going through an emotional shredder.  We are expected to ‘get over it’.

Helen, as a child of eight, your lovely Jacquie was diagnosed with an illness which required too many visits to the hospital.  She eventually had a kidney transplant which gave her the wonder of extended life and incredibly, she gave birth to two children.

The final years of her life when she went through countless surgeries for cancer caused her much suffering.  She died a few days after Christmas 2013.

Helen, you told me that since Jacquie’s death you have lead ‘a double life’ where you sob and ache when no-one sees.

Some of the most comforting words I offer came from the mother of a friend (my former cameraman in China) who had terminal cancer in his mid forties. His Mum said that life isn’t measured by the quantity of years but by the quality within them.  That phrase has always inspired me.

Your Jacquie gave immense love and was greatly loved. She left behind treasured children who will always carry her in their memories. She is remembered.  And deeply, deeply missed.

If we all need to travel the rugged mountain path of grief to realise the value of life, and in the process re-discover ourselves, then perhaps grief is valuable in ways we don’t know.